At the bottom of a deep stone-walled dry well, a man wakes up, only to see another man already there. Without a doubt, both strangers are hopelessly trapped, moreover, after a brief conversation, it is quite obvious that they have a completely different understanding of their environment: the former strongly believes that he is inside an ordinary well, while the latter, is convinced that they are in the bowels of a dismal dungeon. There is only one way to find out the truth. 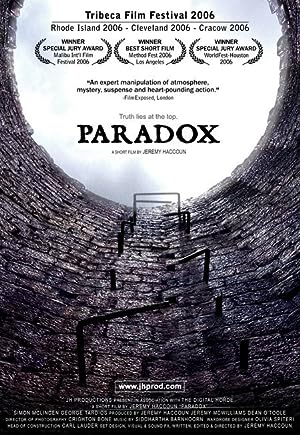 Paradox (2006)
19 min|Short, Thriller|20 Mar 2006
6.8Rating: 6.8 / 10 from 863 usersMetascore: N/A
Two men are stranded at the bottom of a well. One, with a serious injury to his head, thinks his has fallen in is own back garden in present-day Britain. But the other tells him they are really prisoners in a medieval dungeon. Who...
Director: Jeremy Haccoun
Creator: Jeremy Haccoun
Actors: Simon McLinden, George Tardios, Martin Wimbush

Trivia
The director also wrote the film, organized his casting sessions and met about 70 actors to find his two characters. The film in the can, Jeremy did all the visual effects by himself. He learned how to use the software to recreate a CG well from scratch in the most ambitious shots, and composited about 30 green screen shots. He also did the editing, the grading and the whole of the sound design.